“In Thailand, the successful method to make the skin of the pork crackle is by using these three simple steps of boiling, oven baking then deep frying.”

This is one of the many ways to making pork crackle. During my time in Thailand while visiting the family, I noticed that the local’s would crackle the pork in a completely different way than the westerns would. You can tell through the way it looks and how it taste – one day while eating street food, I was observing one of the cooks using a fork and poking all over the skin, spending at least a good hour before deep frying it.

Preheat the oven to 180 degrees. Half way fill your stew pot and bring the heat to boil then add the salt. Once the water is boiling, place the pork skin side down and leave it to boil for 30mins (leave longer if pork is bigger than 700g). Remove the pork from the water, as the skin is still soft, use a fork to stab all over the skin, so when frying the pork will swell from the skin. Place the pork in a tray and oven roast it for 30mins (leave longer if pork is bigger than 700g), this will dry out the moisture from the skin. With a knife, half way cut the pork into stripes, the reason to do this is to easily cut off the rest of the pork after cooking.  In a pan, add a lot of oil and bring the heat to high, ladle the skin with oil before turning it over and leave it to fry, be careful of the hot oil splattering around, use a lid if need be. Once crackled, leave the pork aside to cool then cut through the stripes and slice into pieces you want then serve. 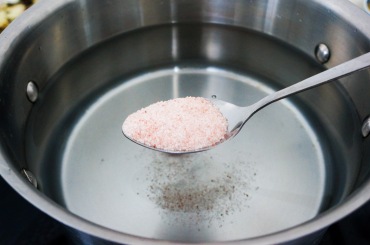 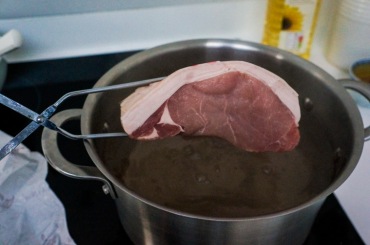 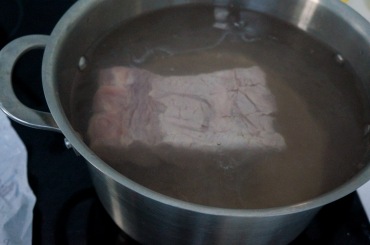 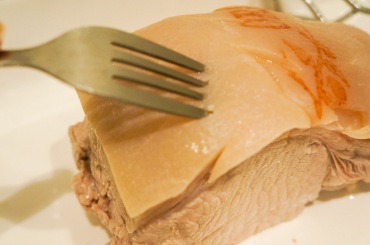 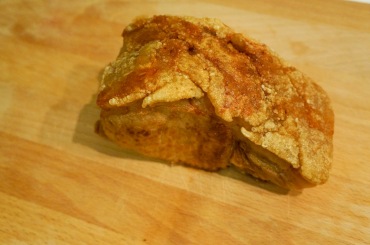